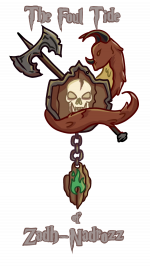 ​
From the shores of Modraz Logh, deep in the Delorwaki Savannah, the grunts and groans of Orcs hard at work could be heard. Led by their Chieftain himself, Gaerth the Battle Hardened, the Foulskins could be seen loading supplies on a ship.
Although Orcs and Goblins being hard at work is nothing new, the odd part would be the ship itself; it would look oddly human-like, and it appeared to bear the flag of Imperio Valegro, the nation which was ruled by the Sand Empress that had fallen silent over a year ago, its capital overrun by monsters and its inhabitants slaughtered, or having fled to the Hadrian Empire.

“Aye, Maraekk!” Gaerth would call out to the tiny Goblin. “What yerr think, wudd this abzolute beauty ‘ere be ready ferr da woild oceans out there t’morrow?” The Orc would ask as he oversaw his men hard at work.
“Aye Boss, ‘t appears to me that come mornin’, the tide will turn and we’ll be able to sail out with the ebb supportin’ us, so the men won't have to row too much!” the Goblin would reply, as he took a peak at the sun, sniffed the wind and spat on the ground.
“Perfekt” Gaerth would reply, with a smug grin on his face. “Dem mud pansiez ain’t gonna know wutz ‘appenin when dey see diz ship appear!”

Come morning, the ship had been prepared, and a select few Orcs and Goblins would step foot on its decks. Maraekk, the tiny Goblin, would take his position at the helm as Gaerth made his way over to the bowsprit.

“Aye Ladz!” the bellowing voice of Gaerth would echo over the silent lake as he turned around. “Da toim ‘az kome! Wezz settin’ sail to da Mud Pansiez! Maraekk’s told me, da toide will be wiff uz! And ol’ Sugm’a der” he’d gesture at the wise Orc “Sug’s sayin’ our journey ‘az been blezzed by da Urneldash, so our succes iz guaran’eed!” Gaerth would hop down from the bowsprite, onto the deck and resume his speech “Owevah! Remembah, wezz goin’ ovah, not ferr foightin’, but tah show dem pansiez wezz ‘ave sumfin else tah offer den juz foightin’! So, yerr beffah behave ‘n follow da orderz wezz gon’ be ‘andin out!”


After a relatively calm trip down South, past the Dragon Islands and through the Sapphire Sea, the ship would lower it’s sails, as the Orcs and Goblins were instructed to remain out of sight, they’d lie down as Sugm’a softly played his drums. Grundolf and Grondolg dropped the anchor as Maraekk scrubbed his hands clean with one of his many bars of soap. By the time the sun had gone down completely, a weirdly tranquil atmosphere had settled in as the ship floated around the coast, dull candle light casting soft shadows over the silent vessel.

OOC: The Orcs are going to be visiting the woodies this evening (9 PM CEST) >: )