[!] In some northern icy hellscape there were the remains of a smashed camp, battered tents waved calmly in the mist while an eary enery surrounded the place. From the remnants of a boiled pot, all frozen above a downed fireplace a trail of blood was seen slowly waving its path through the icy mist. In one of the destroyed tent with claw marks the size of which were never seen before in Eden a small booklet was found next to the sight of a severed leg. This was the remnants of the second hunting party, venturing too far North, isolated and barren [!]

All iz well, vez set up camp in pursuit of hunting grounds, our men have managed to kill one of ze great white demons during a hunt, vez feasted on itz vleisch to celebrate our continued survival, ze men were in great spirit again. Only Dietrich abstained from eating, in ze end he did not eat any of ze thick prepared meat as he kept looking in ze show, mumbling to him what Ich though was some old Attian children's song. Zhen to our surprise Dietrich emerged to eat only ze heart of ze creature vez found. As the rest has been all but eaten by ze crew none took offense. Though Ich seem to recall zat Dietrich vas not himself.

Ve've ventured ze toendra for zwei weeks zu no avail. Some of ze men have started to loose zeir meinds.
Only zwei weeks ago Dietrich Engel lured another sailor into ze mist, and murdered him, feeding on his vleisch.
Ven Dietrich returend without Ülm, ze aforementioned sailor ve questioned him, and noticed his appatite was sufficient, and his belly slown.
On mein authority as Matrosen-Obergefreiter Ich executed ze Matrose on ze spot with my crossbow, sadly ze bolt broke, rendering ze devise useless.
On authority of ze Kommodore ze crew proceeded to feed on Dietrich's corpse in desperation, I abstained as ze Maker would not allow such a travesty.

As vez found ze desicrated remains of Ülm vez noticed that his body was entirely intact except for his heart, it seems that Dietrich did not eat anything other of fat Ülm's body, to prevent shock in ze expedition Ich und the Komodore did not tell the rest of ze men, though what Ich later saw was more disturbing, following back to ze camp something half burried in ze snow was lying in ze middle of a circle of Rocks, Ich had not even seen rocks sinz we left Flüssland. In ze middle of the circle vaz Ülm's heart as if Dietrich was sacrificing it to something. Perhaps that explainz ze full belly vhen Dietrich arrived back in camp.


[!] The report suddenly ends, to be found by any daring adventurer to go looking for the second hunting party [!] 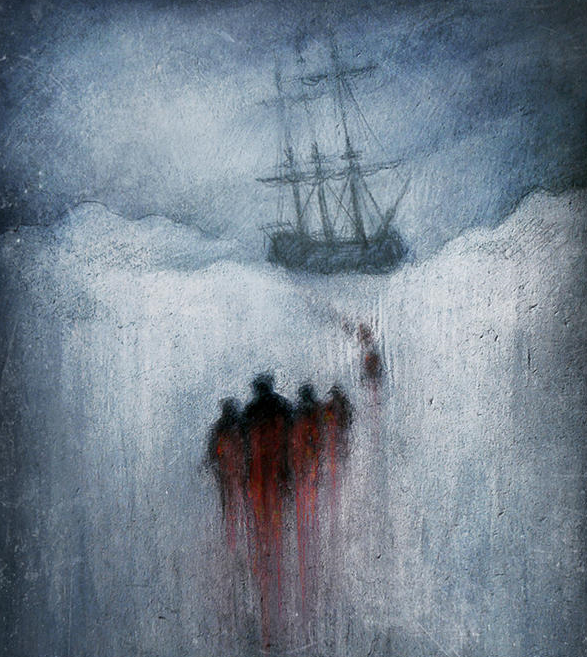 (OOC: This is a copy paste of the reply of the report of the first by @TsjompaV2, it continues the possibility of another expedition in the future)​
Last edited: Jan 23, 2023
Click to expand...