Pieces of the Dunes 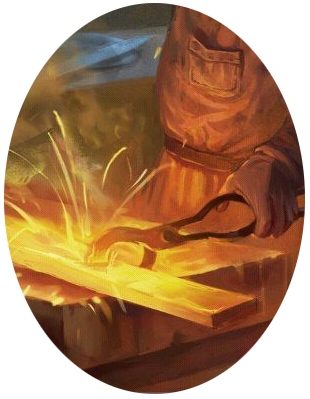 [This will be a log by which the blacksmith Salahishin’s accomplishments in craft are recorded. As well, some of the character’s story built upon it and some of their backstory gradually revealed.]

⫎ A Sword of Legacy ⫍​
-------It was a simple matter. One that he had seldom undertaken, but which he had once or twice before completed without fault. The matter was the craft of a sword. For the desert spoke to him and Salahishin felt that he would have need of it soon.

-------So the blacksmith began. In the small lodgings he had acquired with Satyaki he had been accommodated with an anvil and a furnace. These were small and the ventilation was woefully inadequate for the process of smithing. He had hoped that in time he would get the use of a more advanced furnace and raw materials. For the time being this would have to do - and certainly he had worked with less before so the blacksmith did not fret. The fretting would be sure to be done by his partner. Satyaki was a gentle brother. He would complain of the mess he would make in the process, frail as he was. Though this would be a temporary occupational hazard and the fellow was at that time out in a library. Rather than ask for permission, Salahishin endeavored to ask forgiveness.

-------Making use of his tongs, Salahishin held a lump of iron in the heat of the furnace. He waited… waited… until it became red hot and glowed with the heat of the fire. Then he positioned it on the anvil and getting ahold of his hammer he set to work. He brought the hammer down once, twice, three times. Then three times more. Each blow of the hammer distorted the red hot lump of metal. Blow after blow it weathered between the jackal-sharp jaws. Salahishin’s tongs turned in his grasp in intervals of five or six strikes as the lump transformed into a more recognizable shape. The man labored to spread out the metal until the piece was a long, flat, narrow sheet. It became recognizable for what it was as a point was drawn out at one end.

-------He brought close to 7 inches of the opposite end of the anvil. It was difficult to maneuver around the piece as he hammered into it, creating a distinct lip. Salahishin was acutely aware that this was what made an apt apprentice so valuable. Also that this was the service he had once rendered to his father. Yet he could do it alone with some difficulty, so he did and when he was satisfied he set aside the tongs. He repositioned the piece again, balancing it on the face of the anvil by its length and the blacksmith acquired his hole-punch tool. With a few blows to the indented lip he had shaped the holes came to be. Then he set aside the piece altogether.

-------He spent some time gathering up pair of iron pegs. He set them in a pan and held them in the fire in the same way as he had the lump of iron when he began. When the pegs were hot enough Salahisihin removed them from the furnace and acquired two pieces of wood. They were roughly shaped but smooth enough to hold and hewn from the acacia tree that was so common in the desert. They were oblong in shape, rounded at one end with two holes drilled into them which lined up with the holes he had punched into his metal. They were not so appealing to the blacksmith’s eyes and yet this was a craft of utility, not of beauty. So as the pegs came to a workable cool Salahishin placed the oblong wood on either side of his piece and applied them to the holes. They slid into place and with a few blows of his hammer to them, the iron spread out to fill them. The handle was securely in place. He wrapped a few lengths of thin cloth around it for the comfort of holding and lifted the piece. The blacksmith surveyed his work.

-------“The spoon that feeds the parched desert is the blade of a hungry man.” he said. The words were a proverb of his nomadic ancestors. They would have recognized the thing he had made. A sword familiar to them, particularly to those who rode horseback - with a single edge that arced as gently as a dune it bent in on itself. He was pleased with this work of his.