Welcome to the Magic rules! (and mainly a guide)
This document aims to explain how to use magic in F&F as efficiently as possible.
If you have any questions, please talk to our staff team.

Becoming a mage:
If you have a character that wishes to become a mage, the first step on your journey to becoming one is finding a teacher willing to guide you on your path of mage hood. Finding a teacher can be done by approaching any mage of level 3 and up and simply asking them if they want to take you on as their student in roleplay. Do note that a teacher can and is allowed to say no to your request.

If the mage is willing to teach you, both of you will have to fill out a form to notify the staff team that a new mage is in the making.

After the application has been reviewed and accepted, both the new student and the teacher will be notified that they may begin teaching. From that point, the new student is a level 0 mage.

Becoming a mage teacher:
After your character reaches level 3, they may decide that they wish to take on a student. To be allowed to do that, you are required to fill out a teacher application form.

The form in question can be found here: [LINK]

After the application is accepted, you may take on a student and teach them up to two levels below your own until they reach level 3, from there they can self-teach.

Leveling your mage character:
Once you are a mage you can level up that character to level 10. The first 5 levels of a mage are on a base path and from level 6 onward they are required to choose a specialization path. An example of this is Pyromancy. When a Pyromancer goes to level 6, they can choose to follow the Solarmancy or Magmamancy path. Following one path locks out the spells from the other path. So choose wisely!

Leveling up opens up more spell slots and abilities for the caster. To get from level 0 to level 1, the new caster is supposed to find a casting stone through an event hosted by a Gamemaster. After they find their casting stone, they can immediately do their first bonding trial to activate its magical abilities and unlock the caster's first spell slots. From then on the mage gets their permissions and can use the magic plugin to cast spells.

Leveling up your character is done through a bonding trial. Bonding trials are events hosted by a Gamemaster that sends the caster on a quest to strengthen the bond with the realm they bound themselves to with their magic.
Bonding trials can be requested in an event request ticket in the support discord server. [LINK]

When a bonding trial can be held depends on the type of mage your character is. Elemental magics are season-bound and casters can only level up their characters when it is the correct season or through a location known as Hallowed Grounds. Elemental mages can only do one bonding trial per seasonal cycle if elemental mages wish to level up their character outside the cycle. They are supposed to travel to what is known as "hallowed grounds." in the season opposite to the one bound to their magic. These locations are the places on Eden where one of the forms of Elemental magic is at its strongest. There a spirit of the elemental realms can be summoned for a trial outside the cycle. The time between the seasons can be seen as a natural cooldown. But do note that once the seasonal window has passed, the mage will have to wait until the next season during which they can do a bonding trial to progress.
Voidal mages aren't part of this cycle and have a simple cooldown that can be seen below.

Casting items:
Mages require to have what is known as a casting item in their inventory in order to cast. A casting item can be a Loremaster Approved casting crystal or an item of choice that incorporates the casting gem in it. An example of such an item can be seen below: 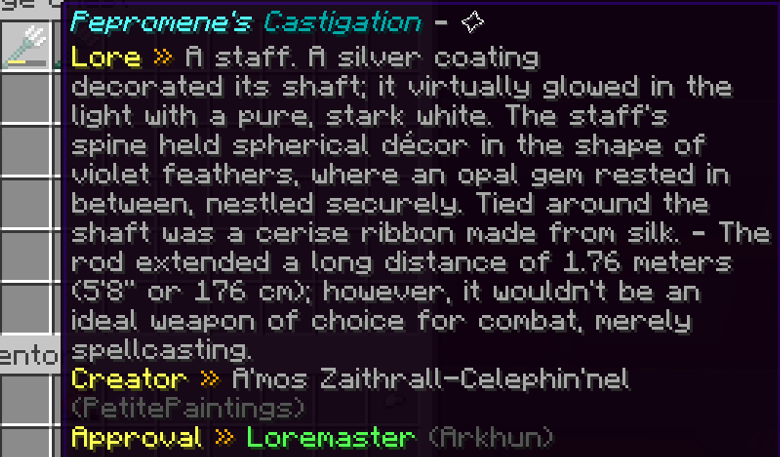 Note that a custom casting item also requires loremaster approval before it can be used.

The Grimoire:
Every mage has a spellbook that holds all the spells they know. Before they can start casting, a mage needs to select spells from their spell list to add to their grimoire. The grimoire can be opened by using the /grimoire command. This then shows the player the following menu: 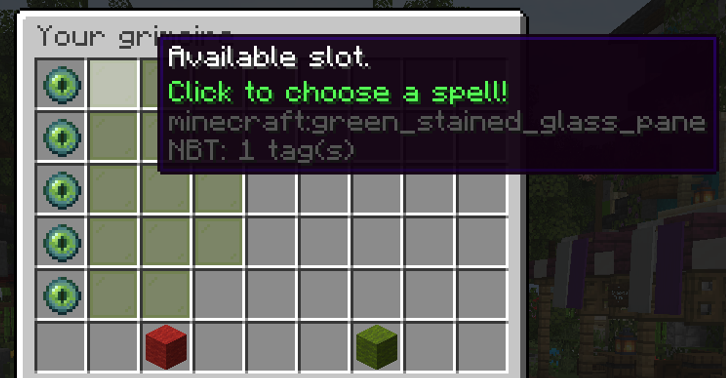 From there, players can select spells from their paths going from level 1 to 5.
Note that choosing a spell is final and cannot be swapped out until a loremaster resets your grimoire.
This can only be requested once per month or after a successful bonding trial.
​
Custom spells:
It is possible for players to add custom spells to the spell list by submitting a custom spell in a lore team request ticket in the support discord.
If the new spell is accepted, it is automatically added to the public spell list and everyone in the same branch can choose it from that point on.
Make sure to follow the spell card format as seen on the wiki when submitting a new spell. In addition, players are also required to submit Roleplay evidence to prove that they invented that new spell.

Opening a tear:
Before a mage can start casting, they need to open a tear to the realm they are bound to. Opening a tear can be done by entering the following command in the game chat:
/opentear

After the command is entered, the game will ask you to emote you opening a tear. After this is done, the tear will appear in the game and look like this: 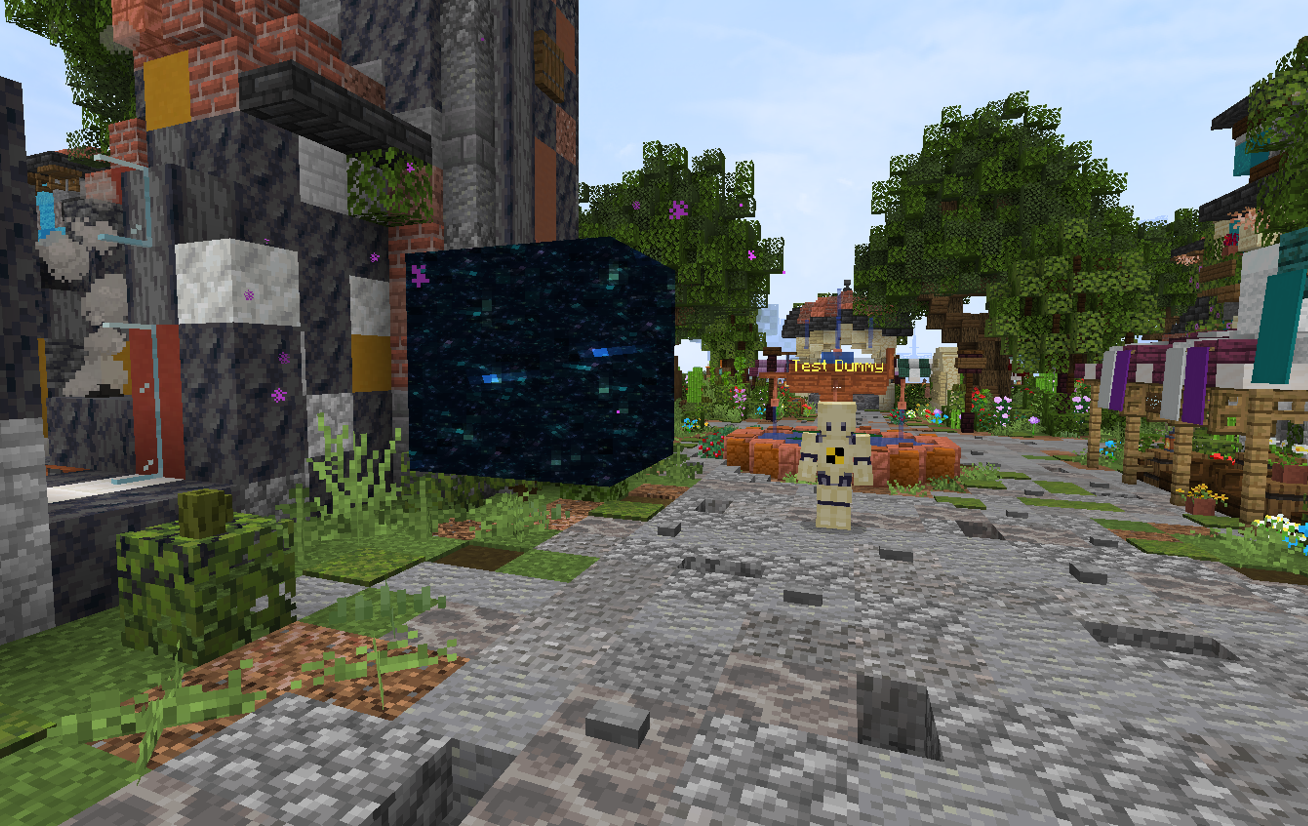 ​
After the tear is opened, a circle of 15 blocks out is created around the tear in which a mage can cast.
A mage can have up to three tears open at a time before the first one closes.
Tears automatically close after the mage is outside its range for longer than 10 minutes.

Closing enemy tears:
If a mage wishes to close the tear of an opposing mage, they may choose to do so as their action in CRP. To attempt to close another tear, look at the tear you wish to close and enter the following command:
/closetear

The game will then ask you to emote you attempting to close the tear and then some automatic rolls decide if it is successful.
That whole process looks like this:

(Both mages automatically roll a D10 + int modifier + Spellcaster level bonus to decide if the tear is closed or not.)​

Casting & Unbinding:
When a mage wishes to cast a spell from their grimoire, they must enter the following command in the game chat:
/cast "spell name" - The spell name tab completes.


After the spell is cast, the mage will see the following in the game chat:

During this period opposing mages get asked if they wish to unbind the enemy spell. Unbinding a spell is a reaction that all mages get to attempt to stop the spell before it is even cast. This looks as follows:

If the spellcaster chooses to unbind the spell, they are asked to type an emote describing their unbind.
If the mage chooses to not stop the cast, nothing happens.

If the unbind attempt is made and is successful, the spell is stopped and the following message is displayed in chat:

This then ends the action phase for the mage who attempted to cast a spell.

If the spell is not unbound, the casting and effectiveness rolls are made automatically and are both displayed in chat.

Some spells require the caster to pick a target or multiple targets. You can easily set those targets using the following command set:

Most mages unlock abilities as they level up. Those need to be activated in the action phase of CRP if the mage wants to use them. If an ability gives any bonuses to rolls, those automatically apply after the ability has been activated. To use abilities, use the following commands: